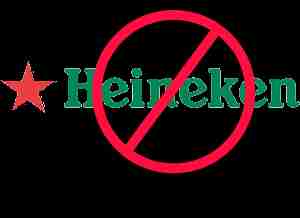 Last month I noted new photography restrictions at Burger King and noted I’d be voting with my dollars and not supporting their business. I’m now learning of another anti-photographer company which should be avoided: Heineken.

The details are emerging on this Flickr discussion thread but in short, Heineken used a bunch of photographs without permission. When confronted with potential legal action, Heineken sent an insulting response, which I’ll paraphrase as “we don’t think we did anything wrong, but here’s a couple dollars to make you go away.”

As an international megacorp, the folks at Heineken have a big legal department which would probably go after any infringers upon its brand; it’s a shame they’re insulting photographers when their own illegal use is noted. Best of luck to those who have had images stolen; I’d encourage photographers everywhere to vote with your dollars and avoid Heineken’s brands.

Photographic Curiosity is not a Crime